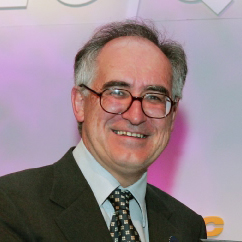 Mario Martinelli is Full Professor in Optical Communications at the Politecnico di Milano, Director of CoreCom and OSA Fellow. He was born in Mantova in 1952. He received the Laurea Degree in Nuclear-Electronics Engineering from the Politecnico di Milano in 1976. He started his research activities in 1997 at CISE Laboratories in Segrate (Milano) where he joined the Quantum Electronics Division. Since 1980 he started new research activities regarding the optical fibers which led him to the position of Director of the Coherent Optics Dept. In 1981 he was Visiting Researcher at the London University College (UK). In 1992, he was appointed Professor of Optical Communications by the Politecnico di Milano, where he activated the first Italian related course; in 1993 he funded the Photonic Lab at the Electronics and Information Dept and in 1995 he was involved in the foundation of CoreCom, a Research Consortium between the Politecnico di Milano and Pirelli Cables and Sistems established to develop researches in Optical Processing and Photonic Switching. In 2004 the Optical Society of America elected him Fellow of the Society for the contributes given in the domain of the optical communications, of the optical fiber sensors and the study of the Faraday mirror effect. He is author of more than 80 scientific papers on the most important Journals and of more than 100 communications presented at international Congresses. He is also assignor of 35 patents. He is reviewer for all the main publications in the optics and photonics research area. He is a member of the IEEE/LEOS Executive Board (Italian Chapter), of the SIOF (Società Italiana di Ottica e Fotonica) Executive Committee and of the Executive Board of the AEIT Group on Photonics and Optoelectronics.